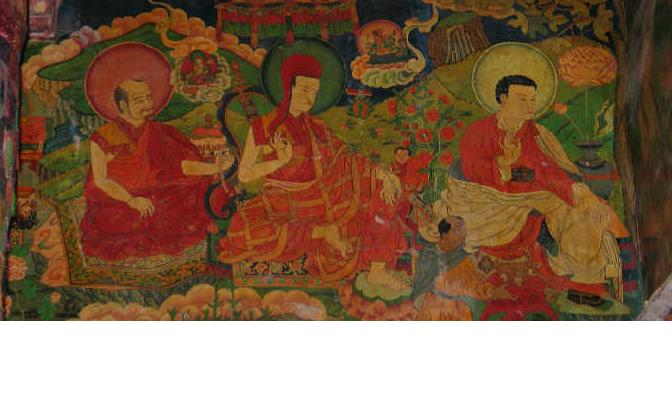 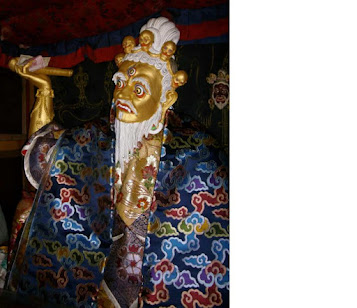 Be a part of building the foundations for keeping a vital part of Tibetan Buddhist culture alive, providing the chance for a
higher education for many and
creating a truly sacred space...

The Dzongpa lineage is a branch of the Sakya tradition of Tibetan Buddhism. As foretold by Guru Padmasambhava and Jowo Atisha, Sakya Monastery was founded in 1073 as part of the second translation movement in Tibet and the Sakya tradition emerged there with the extraordinary work of the great founding masters known as the White Trio – Sachen Kunga Nyingo (1092-1158), Lobpön Sönam Tsemo (1142-1182) and Jetsun Dragpa Gyaltsen (1147-1216) – and the Red Trio – Chöje Sakya Pandita (1182-1251), Drogön Chögyal Phagpa (1235-1280) and Lama Dampa Sönam Gyaltsen (1312-1375). These masters of the illustrious Khön dynasty systemised the entire spectrum of exoteric and esoteric Buddhist teachings, established centres of study and practice across central Asia, brought Buddhism to Mongolia, became the spiritual preceptors to the emperors of China and, for over a century, the leaders of Tibet. Of the innumerable vast and profound Dharma teachings possessed by the Sakya masters, the most important is that of the Lamdre (the ‘path that includes the result’) which was channelled into the human domain by Virupa, greatest of the Indian Mahasiddhas, and contains the most sacred instructions for attaining enlightenment in one life for the sake of all sentient beings. After many generations of being a highly restricted oral tradition, eventually Lama Dampa Sönam Gyaltsen wrote the Lamdre teachings down in his definitive anthology known as ‘the black volume’.

After Lama Dampa, two distinct transmissions of the Lamdre emerged. One was the Ngorpa, which later split into one
format for assemblies (the tsogshe) and one for intimate disciples (the lobshe). Before that, Lama Dampa’s nephew Thegchen Chökyi Gyalpo (1349-1496), who was the revered teacher of the Chinese emperor Chengzu, ensured the continuity of Lama Dampa’s original format for giving the Lamdre according to the black volume. This most esoteric Lamdre transmission came to be known as the Dzongpa, which is also the name of the branch of the Sakya tradition that emerged in the Lhokha region of Tibet near the capital Lhasa with the tantric scholar and adept upholding the transmission, Thumni Kunga Namgyal (1432-1496), the first Dorje Dhenpa. His branch lineage became known as the Dzongpa tradition of Sakya or the ‘Later Dzongpa’ in that it synthesised some earlier teachings of Sakya Dzongchung Zungkyi Palwa (1306-1389) with that of the Lamdre transmission according to Thegchen Chökyi Gyalpo along with Zhalupa practices and other special teachings.

One of the two most celebrated experts of tantra in the Sakya tradition after the founding six masters, Dorje Dhenpa
Kunga Namgyal founded the great monastery of Gongkar Dorje Dhen in 1464 on the site of the ancient Gongkar Dzong as a centre for the study and practice of the sacred teachings of the Sakya tradition in general and its most esoteric meditation instructions in particular. Built in the design of a universal mandala, the entire monastery, consisting of a large temple surrounded by four monastic lodgings, together with paintings, furnishings and statues, was miraculously completed in only one year. In its heyday, there were around three thousand monks at the monastery, and it became a major hub for Buddhist learning and meditation. Gongkar Dorje Denpa Kunga Namgyal, the reincarnation of one of Guru Padmasambhava’s foremost disciples, Nanam Dorje Dudjom, as precisely predicted by Guru Padmasambhava himself, counted the Gyalwang Karmapa (Supreme Head of the Kamtsang Kagy tradition), among his innumerable disciples. He was well known for his ability to propitiate Dharma Protectors and overcome dark forces, and created new ritual systems for the Sangha to do this. He also wrote important tantric treatises, established the practice of the sixty mandalas of the four classes of tantra and, based on supernormal visions, designed many uniquely powerful forms of cham (ritual dances) that are famous throughout Tibet. Dorje Denpa Kunga Namgyal was Guru to Dagchen Sönam Gyaltsen of the Khön dynasty’s Sakya Lhakhang Ladrang and his eminent siblings, and there were successive teacher-student relationships between the Gongkar masters and Sakya Khön family members over the centuries. The second Dorje Dhenpa was the reincarnation of Kunga Namgyal in the Khön family, Jamgön Amezhab Kunga Sönam (1597-1659, the 27th Sakya Trichen). Gongkar Dorje Dhen has also held a special active relationship with the Dalai Lamas, the supreme spiritual and temporal leaders of Tibet since the early seventeenth century. In the Kalachakra Temple within the Dalai Lama’s Potala Palace, which contains an exquisite three-dimensional golden mandala, monks from Gongkar Dorje Dhen practiced the rituals of Kalachakra for world peace. In the Zhol Tsedrub Lhakhang just below the Potala, the monks conducted the White Tara practices for the long life and health of the Dalai Lama and all their benefactors, and in the Meru Nyingpa Lhakhang, adjacent to the Jokhang temple in Lhasa, they performed rituals to Dorje Denpa Kunga Namgyal’s patron Protector, Brahmanrupa Mahakala, to ward off obstacles. The lineage is also famous for the Khyenri style of artwork – frescoes, thangka-paintings and statues that depict the deities and Lamas according to Dorje Denpa Kunga Namgyal’s student Gongkar Jamyang ChenmoIn.

In 1978, a Tibetan child was born in the remote Indian province of Arunachal Pradesh very close to the Tibetan border,
who was later recognised by His Holiness the Dalai Lama as the sixth official reincarnation of Dorje Dhenpa Kunga Namgyal. Given the name Tenzin Jampal Lungtog Namgyal, H.E. Gongkar Dorje Dhenpa Rinpoche received full monastic training and eventually built Gongkar Chöde Monastery in Khera Goan, near Vikasnagar in the district of Dehradun in India, as the first base for the Dzongpa tradition, of which he was enthroned the supreme head by his main teacher His Holiness the Sakya Trizin in 2003. There is also a small temple nearby in a Tibetan colony called Lakhanwala. Although the special Lamdre and other esoteric teachings were very rare, the 30th Sakya Trichen Sönam Rinchen (1705-1741) received them in their entirety from Gongkar Lama Mangthö Lodrö Wangchug and took them to heart, ensuring their continuity in the Khön lineage down to the present day with H.H. the 41st Sakya Trizin. And H.H. the Sakya Trizin – the sovereign of all mandalas – has passed all these teachings to H.E. Gongkar Dorje Dhenpa Rinpoche.

Now more than ever it has become apparent how crucial it is to ensure the continuity of the sacred Dzongpa teachings with a large enough space to facilitate their study and practice in the Himalayan region. H.H. the Sakya Trizin has emphasised how auspicious and beneficial it will be to establish Gongkar Dorje Dhen in Arunachal Pradesh. With H.H. the Sakya Trizin’s encouragement, H.E. Gongkar Dorje Denpa Rinpoche has a vision – to establish a temple in his Himalayan homeland of Arunachal Pradesh that will be a centre of unique Buddhist practice for monks and students to learn and conduct the sacred meditations and teachings of the Dzongpa tradition; especially the Lamdre teachings as well as the daily ceremony of White Tara for healing and longevity, the Dharma Protectors Puja for clearing obstacles, and the Kalachakra rituals for world peace.

In Tibet, before 1959 when the previous Dorje Denpa died, these sacred practices were carried out daily for hundreds of years without interruption by the Dzongpa community. The practices of the new temple will be dedicated to the long life and the realisation of the vision of His Holiness the Dalai Lama, H.H. the Sakya Trizin, and for the benefit of all our benefactors. The new temple will also house the revival of the printing of sacred texts and establish a school for Tibetan language and literature. His Eminence has expressed that one of the key aspects of this vision is for the temple to include an academy to specialise in the higher studies of Tibetan language, literature and dialectics. It is hoped that this will involve classes for monastic residents as well as a nearby campus for laywomen and laymen. Such facilities will then be a huge asset for the higher education of Tibetan, local Arunachali and other students from the Himalayan regions, as well enabling research and publication of important Tibetan Buddhist texts, and creating the lasting legacy of more qualified scholars and teachers. At present, the revival of the ancient Dzongpa tradition has only been partial. One of the main reasons is the limited funding and lack of space and resources needed to support the education and practice the community wishes to have available. However, a beautiful and conducive plot of land in Arunachal Pradesh has been made available to realise this vision, and it will be all the more valuable as it will also serve the needs of the local community.

The practices of the new temple are dedicated to the long life and the realisation of the vision of His Holiness the Dalai Lama, H.H. the Sakya Trizin, and for the benefit of all sentient beings. The new Temple will also house the revival of the printing of sacred texts and establish a school for Tibetan language and literature.